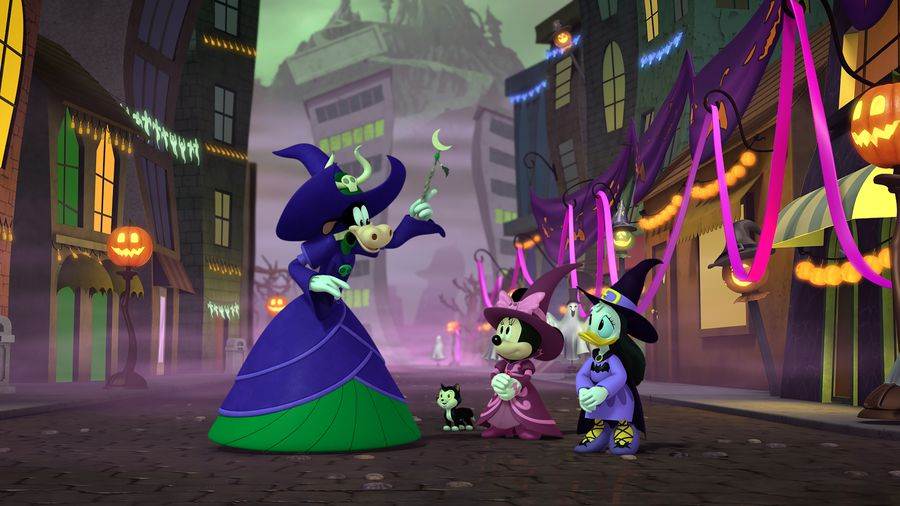 Mickey is your narrator as he and Pluto read a story on Halloween that just so happens to star characters a lot like them. The real stars of the special are the witches, Minnie the Wonderful Witch and Daisy Doozy. Set in Haunty Hills (instead of Hot Dog Hills), other residents include Count Mickula, Mummy Donald, Franken-Goof, Werewolfie Pluto and Pete the Ghost. It’s a story of friendship, teamwork and honesty.

Minnie the Wonderful and Daisy Doozy are in the middle of their final exams as they study to become witches under Witch Master Clarabelle. While they work through four tests that fill Daisy with anxiety, Count Mickula and his bandmates work on a song for the annual Halloween Boo Bash but have a hard time finding the right inspiration. With Pete the Ghost hoping to be crowned the scariest of all this season, things get complicated when he decides that stealing Clarabelle’s wand is what he needs to do to win.

Full of new songs written by Beau Black and David Goldsmith, Mickey’s Tale of Two Witches has a lot of fun with the characters and the Halloween setting. Even Cuckoo Loca gets into the spirit, appearing as “Spooky-Loca” as a bat instead of a bird. The special also gives kids a new Halloween Disney joke: What is Witch Master Clarabelle’s favorite spell? Bibbiddi-Bobbiddi-Moo!

Alex joined the Laughing Place team in 2014 and has been a lifelong Disney fan. His main beats for LP are Disney-branded movies, TV shows, books, music and toys. He recently became a member of the Television Critics Association (TCA).

Item of the Day

© 2021 Logo, contents and media copyright Laughing Place Inc. unless otherwise noted. All rights reserved. Laughing Place is a dedicated group of Disney fans, like yourself, who love Disney. Laughing Place is not endorsed by or affiliated with the Walt Disney Company, or its subsidiaries. By using this website you agree to Laughing Place’s User Agreement and Privacy Policy. Contact us at: Editor@LaughingPlace.com or 404-594-4577.